The afternoon of Monday May 15th found 22 intrepid PAA travelers converging at the elegant and luxurious Four Seasons Mexico City for the start of a six day adventure.  Margaritas and guacamole at the 50 mils bar and an introduction to Dr. Sara Aroeste, then onto “the bus” for a trip to the studio of Polish born Mexican artist Xawery Wolsky in Colonia Condessa, a hip borough of Mexico City.  His thousand of ceramic beaded costumes or gossamer spun wire sculptures had us instantly enthralled in his thoughts of space and time…and, as it turned out, Tina Petra has a drawing of his.  Dinner at Dulce Patria followed …Opening salvo, a welcome cocktail Chamuco with Mezcal, The Devil with toasted earthworms, and a fabulous meal ensued & finished with many members leaving with newly purchased bobbing chickens and wooden toys…perhaps these trinkets will be destined for the next treasure sale….

Tuesday, we toured the great muralists Diego Rivera, David Alfaro Siqueiros and Jose Clement Orazco. We walked thru the Zocalo, the main square and prior to the colonial era it was the ceremonial center of the Aztec city of Tenochtitlan. We walked thru the Metropolitan Cathedral; saw the frescos of the National Palace. At the 16th century colonial Old School of San Ildelfonso we were treated with a contemporary photography exhibit, Candida Hofer en Mexico and the murals of Orozco. and early Rivera.  As negotiated, a brief but productive shopping opportunity was wedged in on our walk to lunch at Cardenal.  Revived with farm to plate colonial cuisine and ignoring jet lag, we headed to The Palace of Fine Arts, where included among what we saw, there was Diego Rivera’s reproduction of his own work that had been demolished by Rockefeller over a disagreement over the inclusion of Lenin’s image. …Did someone say siesta, that’s PAA code for change for dinner. So off to Colonia Roma with the newly relocated and remodeled OMR Gallery with a thought provoking exhibit by German Atelier Van Lieshout before heading to the elegant and delicious evening at Hacienda de las Morales.

Wednesday already! and headed out to the University area to MUAC Museum Universitario de Arte Contemporaneo. With architect Louis Barragan a focus of our day, we started with a traveling exhibit by controversial conceptual artist Jil Magid . This work is best described by Alice Gregory ( August copy of New Yorker Magazine) in the article : Architect that became a Diamond. With many interesting contemporary shows, we did our best to take them all in and still find time for the museum shop. We headed to the amazingly spectacular and popular CASA AZUL where our dear artist Frida Kahlo was born and raised, and which now is home to a museum exhibiting her work and that of other, mostly Mexican artists. Next, a guided tour of the home and studio of Mexican architect Luis Barragan. And ultimately to one of his famous homes, Casa Prieto Lopez, now called Casa Pedregal by its new owner, Caesar Cervantes. But a little back story here for those of you who might have been on the prior PAA trip to Mexico, and viewed Caesar, the Taco King’s fabulous contemporary art collection. Well, that has been sold in a divorce, and his focus now is restoring Pedregal and developing a yoga studio / restaurant next door. We were lucky enough to participate in a soft opening of his artisnal Tetetlan located in the Centro de Conciencia Corporal built with glazed floors revealing more volcano lava…before heading over for an extensive tour of the naturally lit home and garden. For the evening we were off to Colonia Roma for the studio of Gabriel de la Mora. Gabriel and his crew focus on the “intimate function of objects that outlast their usefulness.” So many works, but one group really caught our imagination, paintings made from egg shells, painstakingly sorted by shades of white. Then a walk around the corner to Rosetta Restaurant. By now we were old hands at utilizing purse racks and ordering cocktails. – Sangritas anyone?

Thursday, early departure for the trip to Puebla, where we were greeted by the Toyo Ito designed New Museo International Del Barroco. The exhibit was “Clay between two seas, From Bagdad to the Talavera of Puebla” an interesting story of global trade. A quick stop to meet Jose Lazcarro at his local gallery and then lunch at Casareyna in the Centro Historico… and of course, more ceramics shopping. Next to the AMPARO Museum, a historically renovated group of colonial buildings on the outside, but glass and steel on the inside.  And to top it off the roof offered a spectacular view of the city and all its glorious domes. Contemporary exhibits were wonderful but way finding, a bit challenging and of course the shop was great.  Next stop, a walk around the zocolo and cathedral and then a siesta on the bus, punctuated with one stop by the Federales to check “papers” … Francisco handled it all as we sat tight.

Friday, a guided tour of the stunning Anthropology Museum was just the start. Then on to another tour, the  The Rufino Tamayo Museum and then to the Contemporary Art Museum…all before lunch at the famous Contremar. Best. Lunch. Ever. Real food, real drinks and atmosphere. Clara was approached by a gentleman Damian Frasser , his table had a bet going on about our table….cut to the chase we ended up visiting with his wife, the curator and collector, Paloma Porraz and seeing the collection in their home. Also that afternoon we experienced the Soumaya, a new private museum owned by the Carlos Slim Foundation and designed by his son-in-law, the Mexican architect Fernando Romero. The shiny silver cloud-like building has an extensive collection of well know European artists, and Mexican religious relics. Our farewell dinner was downtown at Azul Historico in the glorious tree-shaded patio of a 17th century palace. Food and drinks flowed, and then magically we were whisked back to the Four Seasons.

Saturday: Just because we were leaving later, didn’t mean there wasn’t more to experience. The Proyectos Monclova Gallery in Colonia Roma with Raul Ortega Ayala’s amazing exploration of the amnesia and destrius of history in his exhibit of “Food for Thought.” And then the wonderful and legendary Kurimanzutto Gallery with an exhibit of the Polish artist, Monika Sosnowska. Yes, Karen Hillenberg has a piece of hers in her front yard. A little more free time (PAA translation, jewelry shopping at the hotel) then a return to the realities of Los Angeles.

Muchas Gracias and endless thank yous to the PAA and to Clara, Sara and Lauren Frankel for enabling a seamless fabulous journey. 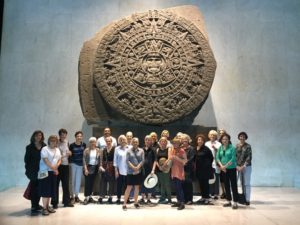 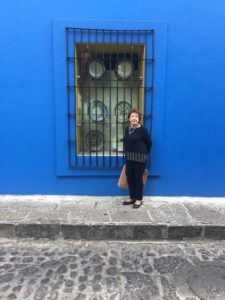 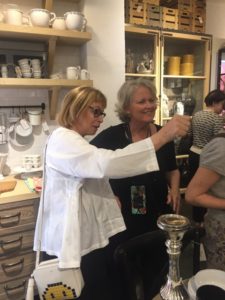 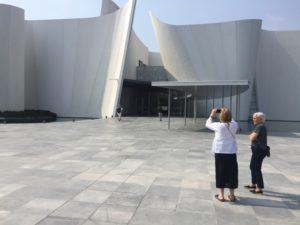 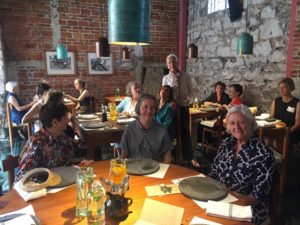 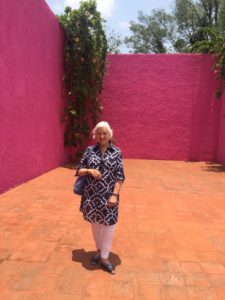 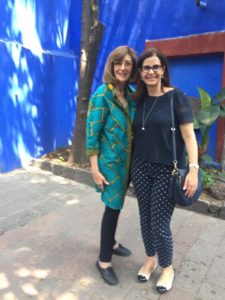