It was nice to see such a large number of PAA members attend the November meeting at
the CraftContemporary Museum ( formerly the Craft and Folk Art Museum ). Sadly, President
Judy Penner announced the passing of Adelaide Hixon, icon, philanthropist and one of
PAA’s “10 Gems”.
Judy thanked all who participated in the discussions of future fundraising events and stated
that an Ad Hoc committee will consider ideas and report their findings to members at the
December general meeting. Alfrida King announced the launching of the new website. This
has been a labor of love and will result in great communication opportunities. The next
Education in LA announced by Betsy Greenberg will be a visit to Lyn Foulkes’ studio on
December 3rd at 5:00 P.M. Mary Urquhart and Kirsten Molz announced in dramatic fashion
with props, boots and hats the destination for the 2020 Education Outside LA – Texas. Details
will be forthcoming. Tina Nieves and Sheri Boyer dressed in colorful pajamas and wool hats,
assisted by Mary Alexander, demonstrated the theme of the holiday party, The Polar
Express. The next PAA general meeting on December 5th will be held at the MAK Center for
Art and Architecture, Los Angeles at the Schindler House.
Suzanne Iskin was introduced and thanked PAA for its continued support commenting “that
the current show could not have taken place without the grant from PAA”. She added,
something we have heard many times, that “the Pasadena Art Alliance is remarkable in its
support of contemporary art in the Los Angeles area”. She then introduced
Holly Jerger, the exhibition curator who led us through three exhibits, bringing to life with her
extraordinary narrative and insight into the installations. When asked about the difference
between craft and art, she replied, “ Craft is art! ”
The first exhibit, Cynthia Minet’s colorful multi-media installation is one-part animal and
one-part machine. The artist combines the form of an extinct North American lion whose
remains have been excavated from the La Brea Tar Pits with a modern day oil pump jack
allowing the “animal“ to move.
In the upstairs gallery, Echiko Ohira’s first solo museum exhibition examined her prolific
artistic production over the last two decades. Her work is founded upon the use of repurposed
paper with her love of the material springing from her childhood in Japan. The show brought
together a stunning series of paper sculptural forms and collages.
RAW: Craft, Commodity and Capitalism, funded in part by the Pasadena Art Alliance, features
nine contemporary artists who work with a range of commodities and artistic material to
explore the historical and contemporary effects of global capitalism. Works in the exhibition
include sculptural pieces and installations created from cotton, sugar, copper, salt, porcelain,
water and other materials. We were fascinated by the artists’ use of materials to tell cultural
stories of such groups as the Gullah, exemplified by Charmaine Bee’s piece, Untitled indigo#3, portal series. For this work she sewed together 1458 unbleached tea bags and then
immersed them into a vat of blue indigo dye, referencing the work of Black women in the Sea
Islands. Yuca _Tech created by Amor Munoz uses art as a vehicle for social change
demonstrated by the utilization of traditional Hennequen (agave) fiber with energy sources.
A video showed how the indigenous community had designed hats and shoes with LED lights.
Once again, this show, supported by PAA, affirms our mission to “ foster appreciation for
contemporary and visual arts in Southern California by supporting artists, exhibitions,
educational programs and art oriented non-profit institutions”. 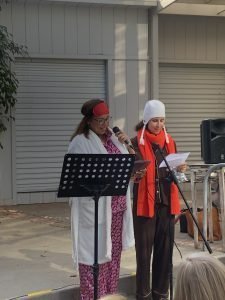 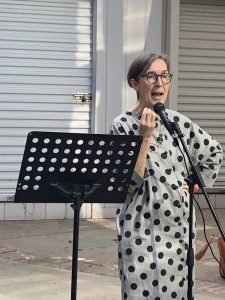 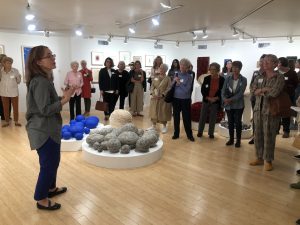 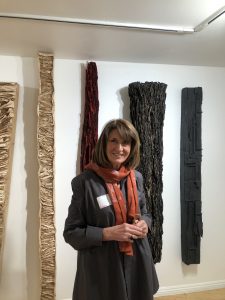 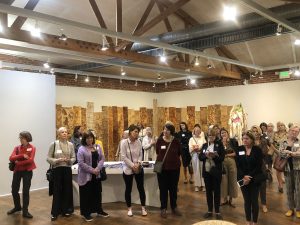 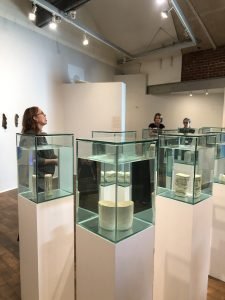 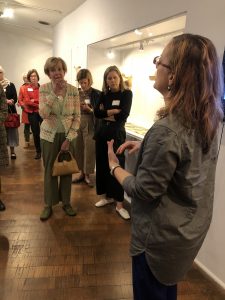 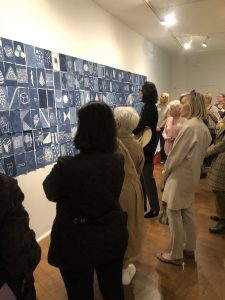