The Schindler House, one of Los Angeles’s most beloved architectural
and cultural landmarks, provided the perfect venue for the December
PAA meeting. The weather cooperated and allowed us to enjoy the
beautiful grounds before moving into the courtyard for the meeting.
Judy Penner announced that in November, Gloria Kondrup, the
designer of our new PAA logo and longtime member, was honored with
an award from the Art Center College of Design. Also, Judy revealed
that sadly, one our ten gems,” Mibs Wolfe passed away on her 96th
birthday.
The meeting proceeded with reports.
• After presenting the financial report, “We’re still in the money,”
Patty Zuber’s tireless efforts throughout the last four years
setting up the Website site were acknowledged and applauded.
She also announced that at the beginning of next month,
members will be able to pay online for events and activities with a
credit card..
• Ananly Bennet literally let her hair down to emphasize the wild
time we will be having on May 9th 2020 at the Art Auction, to be
held at the Masonic Temple in Pasadena.
• Patron Chairs, Nancy Foster and Katie High entertained and
motivated us by reciting an original rhyme: “ We’re the patron
chairs for the auction benefit; we know that his party will be a
tremendous hit . . .”

• Clare Tayback and Jennifer Baxter reported that the Grants
Committee has completed site visits and will be making decisions
in the next weeks.
• To encourage everyone to attend the holiday party dressed in
clothes related to the Polar Express theme, Tina Nieves staged a
dazzling style show with models exhibiting a number of possible
pajama options. Michelle Ratkovich wore a stunning outfit
topped off with a headdress that would be hard to sleep in; Susan
Reynolds reflected a more casual hip outfit; Kirsten Molz wore a
sexy black pajama ensemble, although the slippers were definitely
not sexy; Mary Alexander came as one of the children in the story
wearing a pair of dark blue tailored pajamas; Kathy Gillespie
wore traditional holiday pajamas. The last model was Marsha
Bohr who set a high standard enveloped in a translucent peignoir.
One member was heard to comment, “ That is just like the one my
mother bought me at Bullocks Wilshire for my wedding night.”
• Betsy Greenberg and Annie Brose listed four exhibits of interest
to PAA members.
• The Outside LA chairs, Kirsten Molz and Mary Urquhart, have

• Alfrida King summarized ideas from meetings held this fall to
discuss possible 2020 fund raising ideas .
• The “Lunch Ladies,” Katy Champ and Erin McDonald gave us
directions to Lucques restaurant on Melrose where we enjoyed a
special lunch after the meeting.

• Laura O’Connor then introduced Mimi Zeiger, curator of the
current exhibit, “Soft Schindler,” supported by A PAA grant. The
Schindler House, recognized as an architectural masterpiece,
serves as the site for this provocative installation, presenting
works by twelve contemporary artists and architects interspersed
throughout the premises. The curator’s motivation for this show
was her interest in the story about Pauline Schindler’s subversive
act of painting one half of the two family house pink – an affront
to Rudolf Schindler. Zeiger saw this as a an act of resistance challenging concepts of modernism. She invited the twelve
artists to take the idea of “softness” as a point of inspiration and
to reevaluate current assumptions about architecture. The works
of art include fabric, ceramics, collages with a strong indication of
feminist practice. Each of the twelve artists contributes a different
understanding of the relationship between softness and binary.
Humor is evident in such pieces as Bettina Hubby’s collages that
summon us to “ Minimize Self Criticism, Delete the Chatter, Etc.”
and Anna Puigjaner”s , “Kitchenless” a series of collages that
raise questions about domestic labor in a house without a
kitchen. “Soft Schindler “ brings together a rich and multilayered exhibit of art, architecture and culture.
• The exhibit ends February 16th. 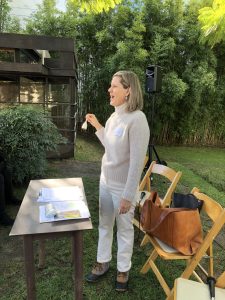 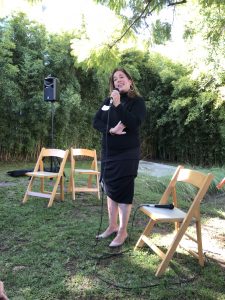 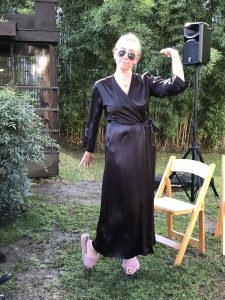 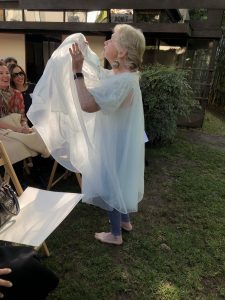