The first 2020 PAA meeting took place at the beautiful Huntington Gardens with a large
number of members in attendance. President Judy Penner greeted everyone and reminded us
all of the importance of responding promptly to meeting and lunch invitations. Though the new
online system caused a few glitches, ultimately, the ability to use credit cards and other
features will make everyone’s life easier.
Judy announced that Nancy Baker Cahill had been cited in the Los Angeles Times as one of the
Faces of 2019 Arts.. Our own Barbara Davis was congratulated by all for her winning the
National Pickle Ball Singles Championship in her age group.
Benefit chair, Annaly Bennett reminded us of the May 9th PAA Art Auction at the Masonic
Temple in Pasadena, saying that this year’s benefit “ will feature new artists as well as old
favorites.” “Poets in Residence” Patron Chairs Nancy Foster and Katie High invited members
to participate in our patron mailing on Tuesday,January 21 st and Wednesday 22 nd at Katie
High’s house.
Annie Brose announced that the previously cancelled Llyn Foulkes studio visit is rescheduled
for January 28 th at 5:00. Those who had previously signed up for this Education in LA event will
have first choice to attend if spaces are available, sign ups will be opened for others. Betsy
Greenberg announced, “Sweet Land” an Industry Production will be opening on February 29 th
with performances continuing the weekends of March 6 th and 13 th .
Gwen Robertson revealed an exciting new opportunity for PAA members to learn about
contemporary art. She and Betsy Greenberg will facilitate three salons during which they will
explore historical contexts and interpretations of contemporary artists. Dates will be
announced.
Mary Urquhart and Kirsten Molz will give further details about this year’s Education Outside
LA trip to Dallas and Houston.
Be prepared to send valentines created by the Development Committee, chaired by Shelley
Sackett which will be sold at the February 6 th meeting.
The Impact Award committee, headed by Louise Brinsley will award $25,000 this year to a
single nonprofit organization that meets PAA award criteria. The deadline for applications is
February 1, 2020.
Patty Zuber gave an informative presentation on how to use our new online meeting and lunch
rsvp system.

Laura O’Connor introduced three members Huntington Gardens staff: Vanessa Wilkie, Sarah
Basile and Jenny Watts, lead curator of the “Beyond The Edge of the World,” the current exhibit
at the Huntington Library and Gardens, supported by PAA. The Huntington, in partnership with
ClockShop, invited five artist and writers to create new works in response to its collections,
with a focus on Thomas Moore’s UTOPIA as a starting point. Artists Beatriz Santiago Munoz,
Dana Johnson, and Rosten Woo as well as writers Dana Johnson and Robin Coste Lewis, poet
laureate of the city of Los Angeles, each found inspiration in the Huntington collections. Nina
Katchadourian’s koi shaped creature with its human like face installed in the Chinese Garden
lake intrigued PAA members. In the Virginia Scott Gallery, we saw maps and documents and a
rare book, Negro Trail Blazers, and we were invited on a video walking tour of the walled
garden, entitled, “Another World Lies Beyond.”
It was a perfect day for engaging in this extraordinary exhibit as we walked from gallery to lake to garden. The exhibit runs until February 24 th . 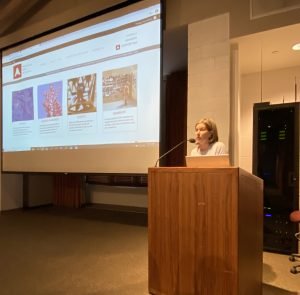 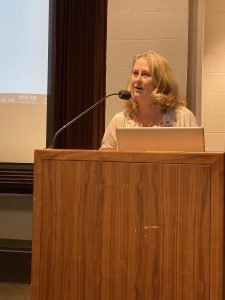 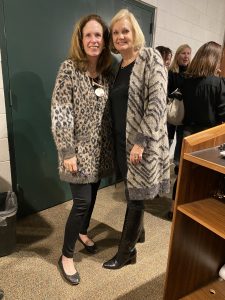 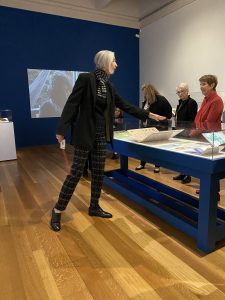 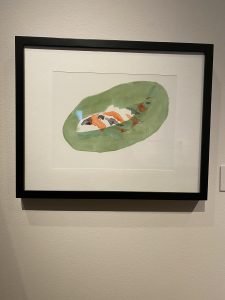 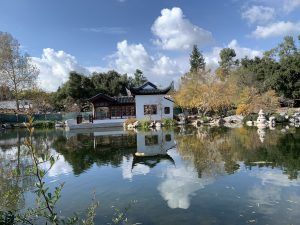 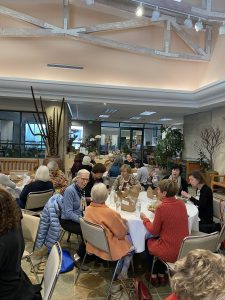