It is difficult to imagine a more stimulating exhibit than Lookin ’Back in Front of Me: Selected Works of Mark Steven Greenfield, 1974-2014. Widely known in the California art community for his tenures as Director of the Watts Towers Arts Center and of the Los Angeles Municipal Art Gallery, Mark Greenfield has tirelessly supported the work of local visual artists for several decades. Over the same period he also established a reputation for his own artistic practice, both as a graphic designer and a fine artist.

A group of about 15 Art Alliance members were treated to a personal tour of the exhibit by the artist on November 18, 2014. We were all mesmerized as he guided us chronologically through his works, weaving in his personal life story. We were immersed in topics related to race, transcendental meditation, voodoo, gang life, and African American stereotypes. We also learned stories of his ancestors and experiences as a resident artist in Salvador, Brazil.  His art possess a vivacity that draws you in immediately and results in strong engagement with the viewers. The show will be on view until April 2015 at the California African American Museum. 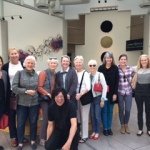 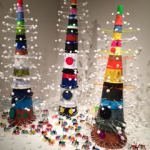